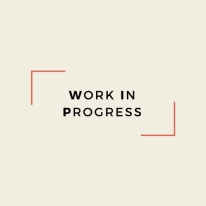 Work in Progress, or WIP, posts are excerpts from open writing projects.  All writing is my own and in the rough draft phase. Take it (but don’t actually take it, copyright me and all that) for what it is!

Taking in the exhaustion that comes with a full day of sunshine and chlorine, they settled into her SUV. A little leery of where her mother and his father were, she looked around and was slightly startled when Adam’s head came into her lap.

“Should we be worried about Mom? Maybe we should split up the trip; I don’t want to leave her alone with him, she’s likely to stock your whole house.”

“I told her there are limitations to what we are buying today.”

Aviators on, smile on her face, she turned up “Sweet Home Alabama” as her hair blew in the breeze, left hand on the steering wheel, right hand on massaging Adam’s scalp, the way she likes it done.

She laughed and briefly hesitated for just the slightest moment, “You know I think I kinda like ya.”

They sat in aimable silence as the music played on and the car continued on its course.

She laughed again. “So I’m not supposed to say what I said while it’s on?”

He picked up his head and stared forward, which is when she knew something was wrong.

She thought back for a second, and was struck that it didn’t even occur to her. “I blocked it out,” she said, tears filling up her eyes. “And you said you were giving it a try with someone else. That still applies?”

She nodded her head solemnly and pulled a U turn. “We’re splitting up the trip,” she said.

She assumed her mother and his father were already at the farmer’s market so she took to the grocery store. When she pulled up, he hopped out too. Coming into the doors, it was the first time she looked at him. She felt so much smaller than she had a few moments ago.

“Why don’t you go pick up some Italian bread? I’ll swing around the store, pick up the rest and meet you at self checkout.” She added a brief, small, best-she-could-do smile to the end of it, and they both went their separate ways.

Stuffed shells were easy, so few ingredients. She stopped in the pasta aisle to grab shells, parmesan and sauce, pre seasoned. Then she hopped over to the diary aisle — to get the Ricotta, mozzarella and eggs — at the end of which was the bakery. Adam stood, loaf in one hand the other in his pocket, towering. She stooped to grab some butter and simply said, “We need a disposable tray. I’m not sure what Linda has in the house for that.”

It was only three aisles down and on their way to the cash register. She grabbed it from the shelf and he took it in his free hand, her basket full. She led him to self checkout and rang things up, waiting for his items until last and paid for it.

“Let me get it,” he protested.

“Excuse me, I told LaLa I’d make her stuffed shells, so I’ll do it.” She had resolved to make it about the baby.

He grabbed the bags and she suddenly felt useless trailing behind him to her car.

“Let’s go make sure they haven’t bought the whole farmer’s market, shall we?”

Neither of them spoke and the music wasn’t even playing on the brief ride from the grocery store to the market. The bubble of stifling silence they felt around the car was broken with the booming sound of Ret’s voice as he mansplains something to her mother. I pulled in, hopped out and said: “We all set here?” Seeing that her mother’s truck already had the hay in it. “Why don’t you grab one of those bagged salads while you pay for it. I’ll wait here with Ret.”

“That kid always did have the ugliest facial expressions,” Ret said, looking to the car and seeing the despondent Adam.

“That’s not the word I’d use for it,” was her only response and her mom popped out.

Ret rubbed his hands together and said “Let’s go make a feast!”

She smiled even though she felt exposed and open, her insides visible to all.